Our members come from various backgrounds, skill levels, and age groups. We're here to support each other and use our talents and experience to help one another. Members from 4th to 12th grade can participate in the Marion County Fair and all other 4-H activities. Members younger than 4th grade can join 4-H as "Cloverbuds" and are an important part of our club.

Ele Dewar started riding and showing at the age of seven in California. She was the CA State Champion for a period of five consecutive years. She was also the Oregon and Washington State Champion for three consecutive years. On the Canadian circuit she was Junior Hunter Champion at Spruce Meadows, Miller Downs, and Thunderbird. Ele established Fantasy Farms in 1986. She has trained her own students to win NWHC, POA, OFEA, OHSET, year-end awards in several equitation divisions. She has served as a 4-H leader for over 20 years. 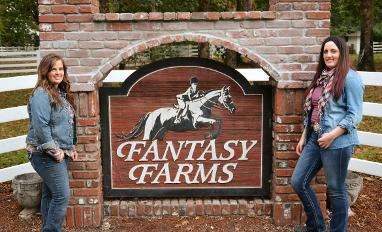 Madi Dewar started riding even before she was born. Her mother, Ele, rode while pregnant with Madi until the saddle horn interfered with her baby bump. As soon as Madi's mom could prop her up in the saddle, Madi was back to riding. Throughout her riding career, Madi has won several state and regional championships. She was undefeated in all of her performance events at the OHSET State Finals, winning five out five State Champion titles. She was also awarded the OHSET State High Point & State College scholarship. In 4-H, Madi has won 21 state 4-H titles, passed nine steps of Dad Potter, and was a 4-H scholarship recipient.

We love our community and are committed to helping it any way we can. Our community service projects benefit the Willamette Humane Society, the Lighthouse Farm Sanctuary animal refuge, Turner Retirement Center, Willamette Valley Hospice, the Turner Police Department, Union Gospel Mission, and local families in need. You can also catch us cleaning up the road near our Fantasy Farms facility every three months, rain or shine!